Home » Biden Promised Kabul Would Not Turn Into Saigon, But Pictures Show the Same Scenario

During a July 8 White House news conference where President Joe Biden addressed the drawdown of U.S. troops from Afghanistan, a reporter asked him the following question:

“Mr. President, some Vietnamese veterans see echoes of their experience in this withdrawal in Afghanistan. Do you see any parallels between this withdrawal and what happened in Vietnam, with some people feeling —”

Biden abruptly cut off the reporter, according to a transcript: “None whatsoever. Zero. What you had is — you had entire brigades breaking through the gates of our embassy — six, if I’m not mistaken.”

“The Taliban is not the south — the North Vietnamese army. They’re not — they’re not remotely comparable in terms of capability. There’s going to be no circumstance where you see people being lifted off the roof of a embassy in the — of the United States from Afghanistan. It is not at all comparable.”

How will Biden explain the striking similarities between the following two photographs posted on Twitter by investigative journalist Stefan Simanowitz, with each picture showing a Chinook transport helicopter landing on top of an embassy to evacuate stranded U.S. diplomats? 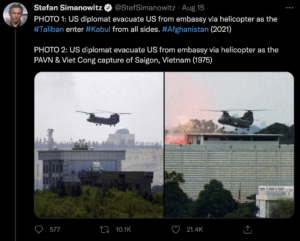 The first photograph was taken this weekend in Kabul, Afghanistan, and the second was taken during the 1975 fall of Saigon. Apparently, the circumstances were more comparable than Biden ever would have guessed. – READ MORE

Biden Promised Kabul Would Not Turn Into Saigon, But Pictures Show the Same Scenario