Well this is awkward…

The Biden administration has been quietly urging agricultural and shipping companies to buy and carry more Russian fertilizer, according to Bloomberg, citing people familiar with the efforts.

The move comes as fears over sanctions have led to a sharp drop in supplies, contributing to the ongoing ‘spiraling global food costs.’ 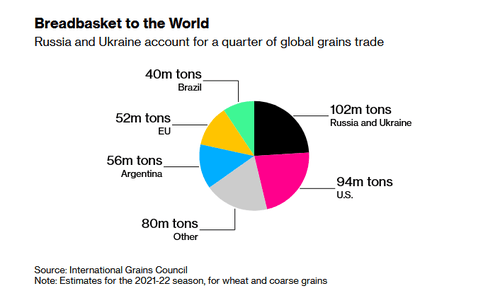 The effort is part of complex and difficult negotiations underway involving the United Nations to boost deliveries of fertilizer, grain and other farm products from Russia and Ukraine that have been disrupted by President Vladimir Putin’s invasion of his southern neighbor.

US and European officials have accused the Kremlin of using food as a weapon, preventing Ukraine from exporting. Russia denies that even as it has attacked key ports, blaming the shipment disruptions on sanctions imposed by the US and its allies over the invasion. -Bloomberg

With Moscow being a key supplier of fertilizer, the US and EU have included exemptions on sanctions against doing business with Russia – however many shippers, banks and insurers have been cautiously staying away out of fear that they might accidentally run afoul of the rules in an expensive lesson. Now, US officials are trying to encourage activity in the space.- READ MORE