Home » The US Bombed A Vital Dam In Syria, Lied About It, & Called Anyone Who Reported The Truth “Crazy”

Many years too late, it appears The New York Times has suddenly discovered that the United States has been committing war crimes in Syria, coming long after it was clear Washington was pursuing regime change in Damascus. With Assad still in control of most of the country, US efforts have turned to far-reach sanctions of late, which have greatly increased the sufferings of common Syrians. Like with Bush’s disastrous invasion of Iraq before, the Times was the foremost cheerleader for that war, laundering Pentagon and admin propaganda, and only many years later admitting the truth that it was all based on lies… so now it seems to be going with Syria.

In its latest reporting, the NY Times has “uncovered” that an elite US military unit intentionally targeted and destroyed a large dam which was vital to the daily life and survival of tens of thousands of people near a vital Euphrates River reservoir. When the 2017 bombing of the Tabqa Dam (or al-Thawra Dam as it’s also called) was first reported, a top American general labeled those accusing the US of being behind it as “crazy”. Like much mainstream media reporting on Syria, those who had it right in real time – many from independent and alternative media – were dismissed as “conspiracy theorists” and loons, but now this… 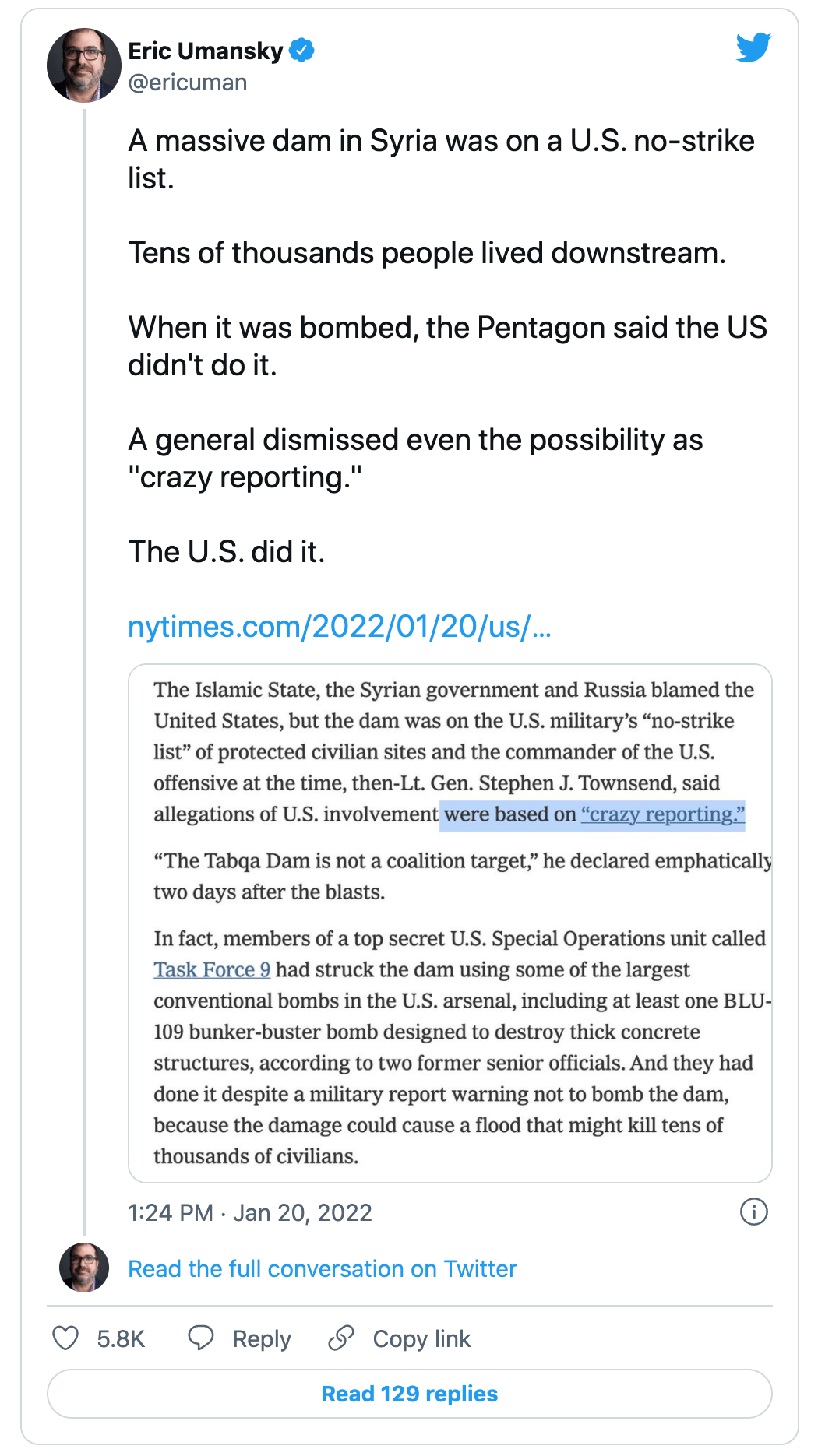 The fresh NY Times reporting begins, “Near the height of the war against the Islamic State in Syria, a sudden riot of explosions rocked the country’s largest dam, a towering, 18-story structure on the Euphrates River that held back a 25-mile-long reservoir above a valley where hundreds of thousands of people lived.”

The US had quickly dismissed those accusing the US of being behind the attack. And since Russia was among them, it was easy for the Pentagon to bat it down as but the “propaganda” of America’s enemies in the region…

The Islamic State, the Syrian government and Russia blamed the United States, but the dam was on the U.S. military’s “no-strike list” of protected civilian sites and the commander of the U.S. offensive at the time, then-Lt. Gen. Stephen J. Townsend, said allegations of U.S. involvement were based on “crazy reporting.”

“The Tabqa Dam is not a coalition target,” he declared emphatically two days after the blasts.

Multiple Syrians had been killed and wounded in the attack, including dam workers and engineers who had rushed to the scene to save it. – READ MORE

The US Bombed A Vital Dam In Syria, Lied About It, & Called Anyone Who Reported The Truth "Crazy"