Home » Seizing On U.S. Weakness, China Warns Taiwan U.S. Will Not Defend Them

Seizing the opportunity presented by the Biden administration’s abandonment of Afghanistan to the Taliban, on Monday, following the fall of Kabul in Afghanistan to the Taliban after the United States’ disastrous pullout from the country, the Global Times, a daily tabloid newspaper under the auspices of the Chinese Communist Party’s flagship People’s Daily newspaper, warned Taiwan that in the event of a confrontation with mainland Communist China, the U.S. would abandon its long-time ally. 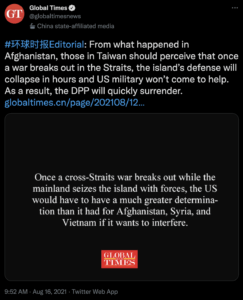 The Global Times began its polemic by asserting, “The US troops’ withdrawal from Afghanistan has led to the rapid demise of the Kabul government. The world has witnessed how the US evacuated its diplomats by helicopter while Taliban soldiers crowded into the presidential palace in Kabul. This has dealt a heavy blow to the credibility and reliability of the US.”

The paper segued to the U.S. pullout from Vietnam: “Many people cannot help but recall how the Vietnam War ended in 1975: The US abandoned its allies in South Vietnam; Saigon was taken over; then the US evacuated almost all its citizens in Saigon.”

Then the paper turned to Taiwan: “How Washington abandoned the Kabul regime particularly shocked some in Asia, including the island of Taiwan. Taiwan is the region that relies on the protection of the US the most in Asia, and the island’s Democratic Progressive Party (DPP) authorities have made Taiwan go further and further down this abnormal path. The situation in Afghanistan suddenly saw a radical change after the country was abandoned by the US. And Washington just left despite the worsening situation in Kabul. Is this some kind of omen of Taiwan’s future fate? – READ MORE

Seizing On U.S. Weakness, China Warns Taiwan U.S. Will Not Defend Them