Facebook just keeps finding new ways to be awful. The latest stunt is to jump into the comments section of your posts to insert some approved agitprop that stays near the top of your feed. 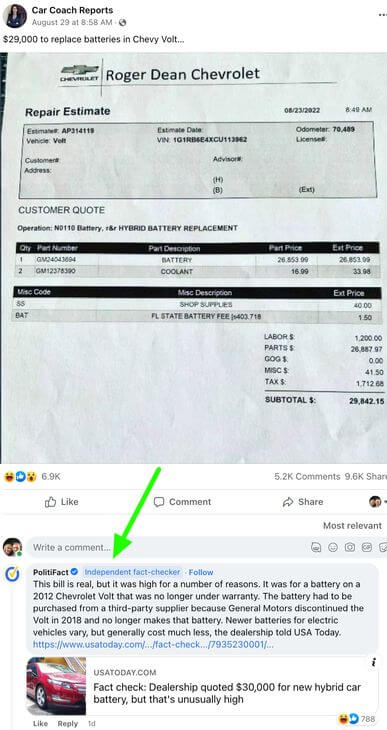 This particular “fact” check concerns an estimate from a car dealership showing that a customer would be charged nearly $30,000 for an EV battery for his Chevy Volt. A Facebook page called Car Coach Reports, which focuses on auto news, posted a picture of the invoice on August 29. Two days later, PolitiFact waded into the comments section to add their take on the story—namely that the battery in question was for a 10-year-old vehicle with 70,000 miles that is no longer under warranty. PolitiFact wrote, “The battery had to be purchased from a third-party supplier because General Motors discontinued the Volt in 2018 and no longer makes the battery.” They quickly added that newer batteries “cost much less.” – READ MORE