Last weekend we showed something remarkable (or delightful, if one is a stock bull): with the US economy on the verge of recession, with inflation topping, with the housing market about to crack, the last pillar holding up the US economy (and preventing the Fed from continuing its tightening plans beyond the summer), the job market, had just hit a brick wall as revealed by real-time indicators – such as Revello’s measure of total job postings – which plunged by 22.5%, the biggest change on record (we also listed several other labor market metrics confirming that the job market was about to crater).

Fast forward to today when one day after we found that initial jobless claims continue to rise after hitting a generational low in March, and as company after company is warning that it will freeze hiring amid a historic profit margin crunch – if not announce outright layoff plans – Piper Sandler has compiled all the recent company mass layoff announcements. They are, in a word, startling. 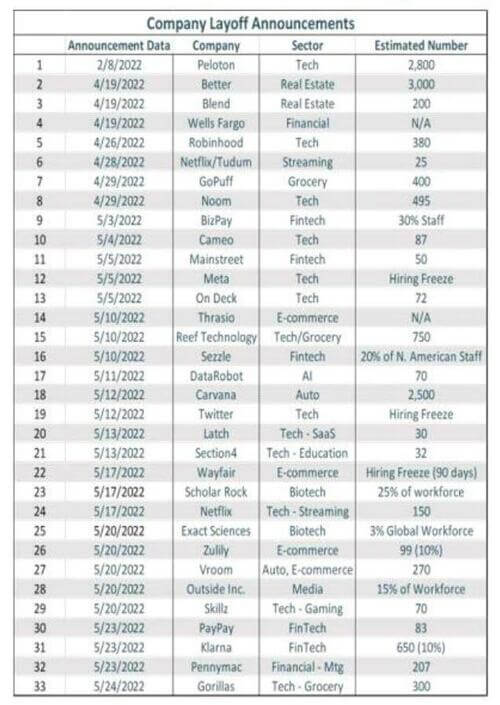 Commenting on the surge in layoffs, Piper Sandler’s chief economist Nancy Lazar says that “post-covid rightsizing means that lots more layoffs are coming” and adds that “many companies overhired and overpaid during the Covid crisis.” Lazar also points out the obvious, that “the stay-at-home bubble was a bubble, and not a “new paradigm” of goods consumption” which means that “a right-sizing cycle is coming, with weaker growth in jobs and wages.”

Here are the stunning implications according to Piper Sandler:

While the above implications are startling for the US economy as a whole, they are especially bad for America’s poorest quintile which, according to Morgan Stanley calculations, now have less “excess cash” than they did pre-covid. In other words, the poorest 20% income quintile is now poorer than it was before Biden’s massive stimmy bonanza. And with every passing month, more quintile will get dragged underneath. – READ MORE