Let me be clear from the start: I do not know the degree to which vaccine mandates have played a role in the massive voluntary exodus from the workforce.

I do, however, know that any true journalist would at least entertain the possibility that the two are correlated. Finding such a journalist proved to be a difficult task: ABC, CNN, CBS, the Washington Post, Reuters, CNBC, The Atlantic, the Wall Street Journal, the New York Times, The Hill, Business Insider, Fortune, FT, Vox, Market Watch, and even right-wing publishers like the New York Post and Fox Business have all covered the mass resignations without so much as a mention of vaccine mandates. The WaPo, citing a single anecdote, went so far as to suggest that unvaccinated workers are causing others to quit by making them feel unsafe:

Time magazine, to their credit, at least addressed the possible relation and tried to provide a counterpoint, citing employee vaccination numbers in the high 90 percents ahead of mandates, like Washington, where University of Washington hospitals employees are 97 percent vaccinated—sounds great! They just forgot to do a follow-up piece after the mandate went into effect … when Washington lost 3 percent of its sixty-three thousand state employees in a single day. That’s a sizeable percentage when you consider that monthly separations (terminations and quits) are typically 3–4 percent in the US and this drop occurred in one day. Not to mention these separations are added to routine employment frictions.

Now, let’s discuss the awfully interesting correlations between the announcements of vaccine mandates and the “Great Resignation”: 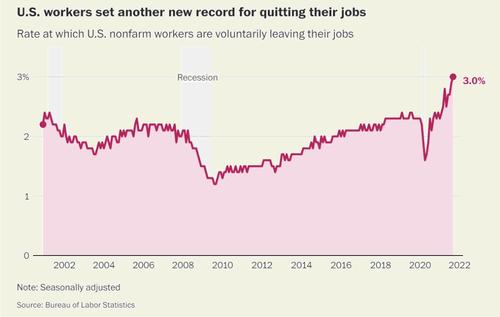 The US has clocked two consecutive all-time highs for the percentage of workers quitting within a single month, 2.9 percent for August and 3.0 percent for September (data released on a two-month delay). This coincided precisely with an onset of highly prominent vaccine mandate announcements within the private and public sectors, one of the earliest being Google on July 28, which inspired a tsunami of corporate signaling throughout the month of August. In a similar fashion, California set the trend for a series of state-level mandates, most of which were announced in August, with enforcement to begin in late September and October. August was indeed the first month in which this topic seeped into mainstream public discourse, the buzz increasing in September as Joe Biden announced the mandate for federal employees. – READ MORE