Under the Biden-Harris administration, there has been a considerable rise in gun stores having their licenses revoked by the Bureau of Alcohol, Tobacco, Firearms and Explosives (ATF).

The Trace reported that 92 Federal Firearm Licenses (FFLs) had been pulled so far this year — this is the highest number since 2008. 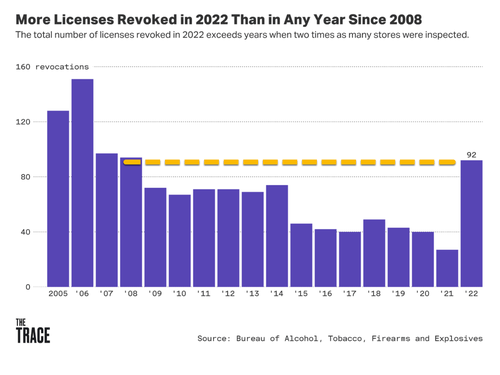 And comes nearly a year and a half after President Biden declared war on ‘rogue gun dealers.’

“The numbers provide the first indication that federal investigators have cracked down on lawbreaking gun dealers following guidance from the Biden administration ordering the agency to take a stricter tack during inspections,” Trace said.

The revoked 92 FFLs account for 1.3% of all the gun shops inspected. The revocation rate under Biden has skyrocketed to the highest in 16 years. – READ MORE