Growing disillusionment over the value of a four-year college degree has has many high school graduates and their parents rethinking whether it’s the right financial decision.

In a recent Gallup poll, 46% of parents said they would prefer their child pursue an alternate to a bachelor’s degree – with more than one-third citing finances as an obstacle. And according to a Federal Reserve study, just 56% of adults under age 30 who have degrees say the benefits outweigh the costs, Bloomberg reports.

In general, the older one is, the more value they see in the value of college – which is supported by data. Overall, a bachelor’s degree increases a person’s lifetime earnings by 75% vs. those with a high school diploma, according to (not exactly unbiased) research from Georgetown. 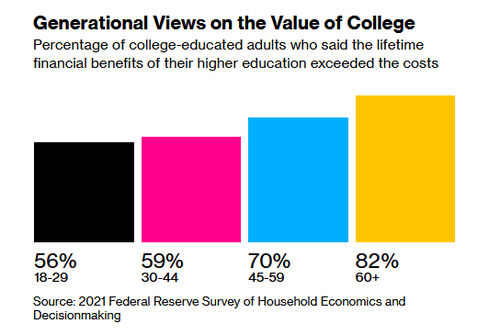 That said, it’s becoming harder and harder for younger Americans to stomach crippling student loans while tuition has outpaced even today’s inflation.

This growing disillusionment is showing up in enrollment data. The number of students registered in undergraduate programs plummeted during the pandemic and continues to fall, defying expectations for a rebound as in-person learning resumed. There were more than 662,000 fewer students registered in spring 2022, a 4.7% drop from the year prior, according to the National Student Clearinghouse. -Bloomberg

College degrees have historically increased a person’s job opportunities – and for sure, that still holds true for jobs requiring esoteric knowledge – however things are beginning to change in the tightest labor market in decades, as many industries have begun relaxing or scrapping college-degree requirements altogether. What’s more, jobs which don’t require a degree have seen wages jump as employers have to pay up amid a worker shortage.- READ MORE