Home » Nobody Wants To Work: Job Openings Soar To All Time High 9.3 Million As Record Numbers Quit Their Job

In case we needed more proof that the US labor market is in a historic supply-demand mismatch crisis sparked by Biden’s generous unemployment benefits, a few hours after the latest NFIB showed that it has never been more difficult for small business to fill job openings, moments ago the BLS confirmed what we expected: that the number of job openings in March (recall JOLTS is one month delayed) soared by a record 998K to 9.286MM in April from an upward revised 8.288MM in march, and the highest in the history of US jobs data! 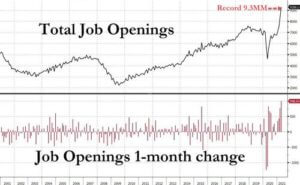 The record number was also a record beat to the already lofty expectations of a 8.2 million print. 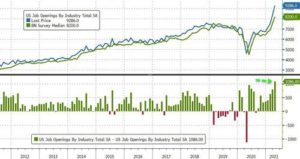 Separately, in yet another indication of the record surge in demand for labor since the collapse last April when there were 18.1 million more unemployed workers than there are job openings – the biggest gap on record – the gap has since shrunk dramatically to just 526K in April, down from 1.4 million in March. Yes: despite the covid shock, there are just half a million more unemployed people than there are job openings!– READ MORE

Nobody Wants To Work: Job Openings Soar To All Time High 9.3 Million As Record Numbers Quit Their Job