A stunning new report ties social media platforms – the most prominent of which is Facebook – to “the majority” of online recruitment in active sex trafficking cases.

Human Trafficking Institute CEO Victor Boutros said on CBSN Wednesday: “The internet has become the dominant tool that traffickers use to recruit victims, and they often recruit them on a number of very common social networking websites. Facebook overwhelmingly is used by traffickers to recruit victims in active sex trafficking cases.”

The report uses data from every criminal and civil human trafficking case that’s active. “This report actually looks at the last 20 years of trends in the federal government,” Boutros continued. 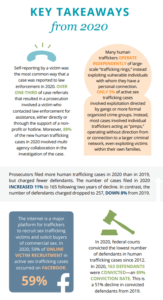 Children accounted for 53% of identified victims in active criminal human trafficking cases in 2020, the report says, and a “large majority” of them were women.

An active case is defined as one where defendants were charged in 2020, or had charges pending in 2020 from previous years. – READ MORE