Home » Banks Are So Stuffed With Cash They Tell Companies: No More Deposits 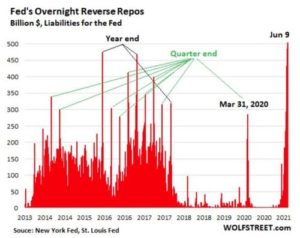 Some banks, awash in deposits, are encouraging corporate clients to spend the cash on their businesses or move it elsewhere. It’s a strange case of “No More Cash Please“.

U.S. companies are holding on to billions of dollars in cash. Their banks aren’t sure what to do with it. Some banks are encouraging corporate customers to consider alternatives.

Top of mind for many big banks is a rule requiring them to hold capital equivalent to at least 3% of all assets. Worried about the rule’s impact during the pandemic, the Fed changed the calculation in 2020 to ignore deposits the banks held at the central bank, but ended that break this March. Since then, some banks have warned the growing deposits could force them to raise more capital, or say no to deposits.

“Raising capital against deposits and/or turning away deposits are unnatural actions for banks and cannot be good for the system in the long run,” Jennifer Piepszak, then-CFO of JPMorgan Chase & Co., said on a call with analysts in April.

One strategy is reverse tiering, giving clients lower yields for additional deposits. Asking customers to move some funds to another, smaller bank also is an option, said Pete Gilchrist, an executive vice president at Novantas Inc., which advises banks.

In recent months, banks including BNY Mellon have focused on moving clients from deposits into money-market funds. The money-market funds, in turn, need new places to park all that new cash and earn some interest. But rock-bottom interest rates have pushed them into storing it back at the Federal Reserve overnight, in a facility that pays them zero return and had been largely ignored for the past three years.

Bear in mind that the Fed, via QE has been stuffing banks with cash for a year at a  rate of about $120 billion a month.

Not only do the banks have no use for it, it’s starting to cost them money.

The Fed’s solution, using the word loosely, is to do reverse Repos draining banks of cash.

The Fed Says This Was Expected

What really caught my eye was Fed statements as noted by Richter.

New York Fed President John Williams emphasized repeatedly that the reverse repo system “was working really well,” and that there were “really, no concerns about that. We expected that to happen. It’s working exactly as designed.”

Meanwhile, please note The Fed Says Inflation Is Transitory, It Has a Vested Interest to Lie

Banks Are So Stuffed With Cash They Tell Companies: No More Deposits