The eviction moratorium ends July 31. Millions of households are behind with no confidence in making payments. 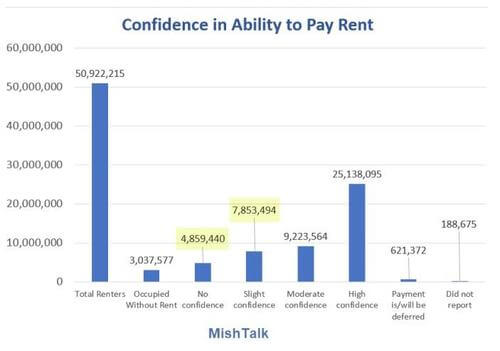 State and local governments have struggled to distribute $47 billion in federal money aimed at helping tenants who can’t pay rent because of the pandemic-triggered downturn, leaving many people at risk of being forced out of their homes when the moratorium expires.

Just $3 billion of the aid authorized by Congress in December and March had been delivered to landlords and tenants as of June 30, the Treasury Department said in a report last week.

Meanwhile, many landlords have been squeezed because they have been unable to collect rent but remain on the hook for taxes, maintenance and other bills.

The moratorium, which originated from an executive order signed by then President Donald Trump last August, shields tenants who have missed monthly rent payments from being forced out of their homes if they declare financial hardship. They still owe the back rent.

The moratorium was originally set to expire Dec. 31, 2020, but Congress extended it until late January, and the CDC has extended the order three times.

in June, the Supreme Court rejected an emergency request to clear the way for evictions after the Biden administration said it would extend the moratorium for one final month. Justice Brett Kavanaugh voted with the 5-4 majority to keep the moratorium in place. However, he issued a one-paragraph concurrence saying he believed the moratorium was unlawful, but was willing to leave it in place for July. “In my view, clear and specific congressional authorization (via new legislation) would be necessary for the CDC to extend the moratorium past July 31,” he wrote.

I created the lead chart from a Census Department Data Feed.

Here are a few more charts.

Confidence in Ability to Pay Mortgage 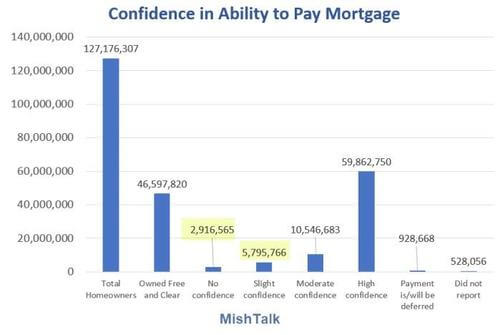 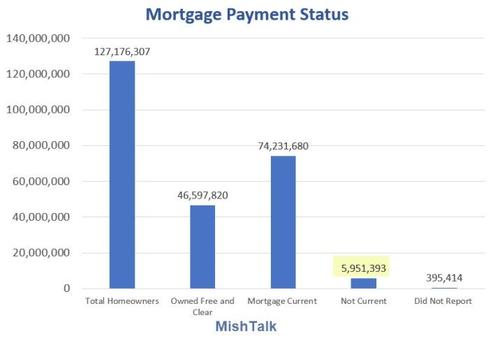 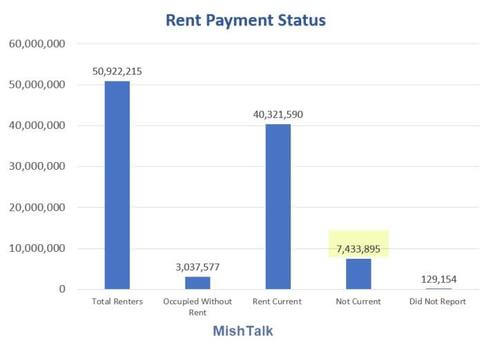 These numbers are way understated.

A: Every chart is missing 72,166,927 households in which the Census Department does not have tenure data.

Some of those unknowns are not current or in trouble even if they are current.